One Game I Don't Want to Play

Today I am buying socks. Lots and lots of socks. Not for me--for the girls. These socks will probably all be one color and one size. Because half of their socks wind their way from the floor to the dog's mouth to his digestive tract to his ---well, you know by now--Hannah and Charlotte are no longer permitted to request a particular color or size or style.

"Because Mommy is tired of playing "Guess what I found in the dog's poop this morning?!"
Posted by Melanie K at 12:05 PM No comments:

"The Number Zero, Brought To You By The Party Of N-O"

By now you've probably seen the list of things that Kairos has eaten. There's no telling what else he's ingested that we missed.

Finally! There was a bit--a tiny poop. More of a nugget, really. He moved to a different patch and continued his efforts. The neighbor came out of his side gate, scaring Kairos, who spun around, sending a sock whipping from his butt.

Two days ago, I saw him throw up what looked like either a sock or a napkin. Before I could get to it, he swallowed it again. I hope that this was the sock that he just pooped out and that there isn't another one in there somewhere.

And I still don't know where or when he found the sock. I do know that, because some of the sock poop got stuck to him and he won't left me wipe it off and he keeps trying to wipe it on the floor, I'm going to have the groomers shave his butt today.
Posted by Melanie K at 11:02 AM 4 comments:

Overheard in a Coffee Shop

The guy sitting at the table behind me was trying to set up a web account. He had apparently already paid for the account, but hadn't yet received a confirmation email, so he called customer service.

After a few minutes on the phone, he uttered one of the funniest things I've heard in a long time:

"Yeah, you're right. I guess "butt smoke" is too obvious a password."

Thanks for the laugh, dude!
Posted by Melanie K at 11:18 AM No comments:

Kairos is one of the happiest dogs I've met. He's so excited to see people, whether a new acquaintance or an old friend, that he pees on them. Or on the ground at their feet. His tail is almost always wagging, occasionally even while he sleeps. Which makes it that much more difficult to understand why he seems intent on killing himself. With a sock. Or a headband. Or anything else that he can ingest that stands a good chance of blocking or wrapping itself around his intestines.

To date, the tally stands at:

I've been doing a little poking around and some of the tips I've found include:

The sock exited the dog, using the back door. No complications. No $600 vet bill. Whew!

Hannah please don’t put the chickens down the slide again! And NO she does not want a ride in the swing again, either.

Charlotte—DO NOT wash your hands with that toothbrush!

Charlotte! Toothpaste! NOT the soap!

Whatever that is DO NOT put it in your mouth!

Jesus Edith! There’s a ribbon sticking out of the dog’s butt.

Hannah's Poppy earned an Honorable Mention at the art contest sponsored by the Loma Prieta District Womens' Club and one of the judges said that she would like to buy it when Hannah has her first gallery show!

She literally glowed when her teacher gave her the news.

I guess I'd better get started on transforming my plant room into an art studio for the girls.
Posted by Melanie K at 7:00 AM 8 comments:

A Paean to Citi--Well, Maybe Not

First one of 2009! How, you must be asking, did I manage to go this long without finding something to be outraged about? Well, that gives us

Dammit #2:
R u s h L i m b a u g h. He calls women hos and femanazis; says that women work because they're unattractive and don't have alternative options for meeting people (men). He's loud and rude and crass. And yet he wonders why women don't like him. He has republican party bigwigs cowering at his feet and kissing the ring. He actually had the gall to invite the president of the US to debate him on the issues. Obama has more important things to thing about than a bloated talking head who thinks of no one but himself, but R u s h isn't not stupid; even this futile invite serves his purpose: Obama won't take the bait, leaving R u s h with the ability to say that Obama was afraid to come on his little show and "face" the 20 million, mostly male, listeners.

Dammit #3:
Bernie Madoff's portrait didn't go at auction. I expected that someone would have thought 100k a small price to pay for a large, sneering dartboard. Oh, wait: no one had any money left to pay for it. And he's just not worth the jail sentence one might get for slashing it. Not that I'm recommending that. Really.

Hannah's Poppy took first prize for her age group in an art contest sponsored by the Woman's Club of Palo Alto this weekend: 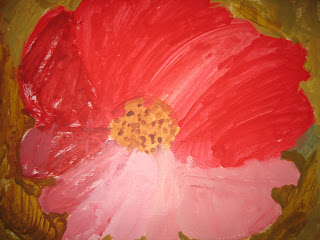 The winners advance to the district competition on March 9.
Posted by Melanie K at 12:09 PM 1 comment: