Charlotte's new favorite movie is Charlie and the Chocolate Factory. The movie is cute so I don't mind that I've already seen it 10 times (I'm not listing the real number here as I don't want you to think that my children watch television all day). The problem arises, again, from her inability to make certain sounds--"ak," for example--and her need to add an "a" at the end of many words and often, mid-word.

Yesterday afternoon we were at Peet's (yes, again!) and Charlotte said she wanted to watch "Chadee a Chocit F u c k a de tee."

Much more of this and I might have to switch my office to the other Palo Alto Peet's.
Posted by Melanie K at 4:32 PM 2 comments:

I'm making up for lost time: there are new posts up on Hannah's Gallery.
Posted by Melanie K at 4:31 PM 1 comment:

1. Hannah, on seeing a photo of a model:

Mommy, why is her skirt all the way up to her vagina?

Her speech therapist didn't understand at first why I thought this an important thing to work on. But once I told her that this had been yelled at me in a crowded store and in a coffee shop, she figured it out.
Posted by Melanie K at 11:31 AM 3 comments:

For Charlotte, it's Disneyland: 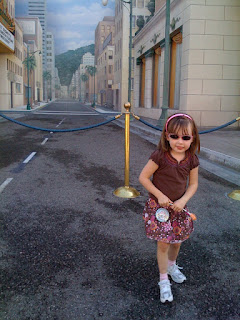 For Hannah, it's her art (well, Disneyland, too): 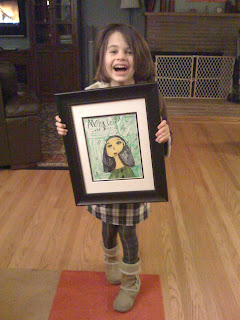 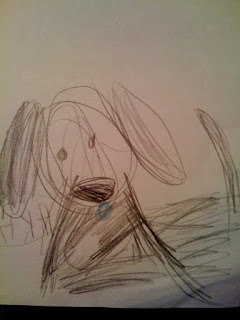 Just a little sketch Hannah whipped out this morning. And by "whipped out," I mean "in under two minutes."
Posted by Melanie K at 5:47 PM 2 comments:

There are three new posts, covering 2008 (a small sample) through this week.

Stroll through and remind yourself that she's only six.
Posted by Melanie K at 11:04 AM 1 comment:

Let's say that you're waiting in line at your local coffee shop.

It is not a pharmacy. HIPAA does not apply. The person in front of you is not giving out sensitive information and, in most cases, will not mind if you overhear an order for a nonfat soy double latte, or anything else on the menu.

It's a coffee shop, not a bank. You do not need to stay behind some invisible line and wait until the Next Available waves you over.

Rather than force the line behind you out the door, please, move up. Really, it's OK. And if someone gives you trouble, tell them to talk to me. Especially if I'm waiting, un-caffeinated, in a cold rain.
Posted by Melanie K at 7:31 PM 1 comment: 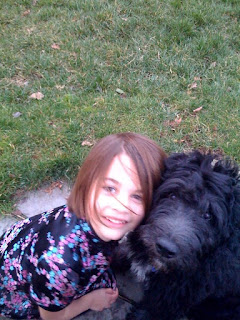 What follows is from my favorite chain-esque mail of all time. This is possibly not a very good description, as I detest chain email to the point where I am certain to spend eternity in hell, or at least be hit by a bus tomorrow, because I refuse to forward these letters. But this one was fun and a great way to learn random things about people I've known for years. In two cases I learned things about women I've know for most of my life.

So my responses to this I-only-saw-it-on-Facebook chain was going to be my post for the day (well, yesterday, if I'm being honest; I never got around to posting it), but then I saw that Dan Zak also received it and then used it for a column in today's Washington Post. His is way funnier--and he was paid for it!--but this is mine:

Rules: Once you've been tagged, write a note with 25 random things, facts, habits, or goals about you.

At the end, choose 25 people to be tagged. You have to tag the person who tagged you. If I tagged you, it's because I want to know more about you.

25) I am afraid of spiders.
24) I once passed out when my brother dropped a plastic spider on my shoulder.
23) I am a chocoholic who is allergic to chocolate. Fortunately it is a mild allergy.
22) I would like to live in Europe for a year or so.
21) I am equally afraid of success and failure.
20) I didn’t get my first cavity until I was 30.
19) My favorite TV show is House.
18) I once went an entire year without watching TV.
17) My favorite TV show is The Daily Show. (Yes, I know. Two favorites)
16) I can’t watch psychological thrillers.
15) I also can’t watch horror movies.
14) In the year before my mother died, I spoke to her for a grand total of three minutes.
13) I suck at math.
12) Sometimes I still wake up from nightmares about waiting tables.
11) If I can see the entire plot line of a show in the first two minutes I can’t watch it.
10) I love the type of friends you can go for years without seeing and then pick up where you left off.
9) Unmedicated, I am painfully shy. Medicated, I sometimes still am.
8) Politically I lean very hard to the left, but I never vote based on party affiliation.
7) Give me a pint of ice cream with any sort of chocolate chunk, chip or ribbon and I will do a little mining to remove all of those chocolate bits.
6) I hate these lists. [[Update: obviously not true]]
5) I have started getting up at 5:00 two days a week. This is perhaps more shocking to me than it will be to you. (Depending on how well you know me, of course.)
4) I’m a writer and almost (REDACTED) years old, but have only recently figured out the mysteries of the semi-colon.
3) I like my in-laws more than my own parents (see #14).
2) I detest having my photo taken.
1) I hope I have 25 people to send this to.

And There Goes the Neighborhood?

Now that Kairos has finally had all of his shots, Charlotte and I were able to take him for a walk yesterday morning. We were three blocks from the house when I found what looked like a small bag of cocaine.

Cocaine. In a little baggie. Just sitting there, next to the telephone pole between the sidewalk and road, on the only patch of grass that was covered in the yellow oxalis that Charlotte likes to pick.

Kairos found the bag first and I barely managed to get it away before it ended up the same way as a few other things he's put in his mouth--slimy, $600 vomit on the floor of the vets' office (though in this case it would probably have been a bit more expensive).

Because I forgot to bring my phone and I didn't want to just leave the baggie there for another dog--or little kid--to find, I scooped it up in a poop bag and took it to the police department.

One might think that the possibility of drugs appearing on a street in a quiet neighborhood might excite a little attention, but in this case you would be wrong. I sat in the police station for 45 minutes before anyone came to take the bag. The receptionist only wanted my name, address, phone number and where I found the bag.

When she finally appeared, the detective only wanted my name, address, drivers license number, phone number, cell phone number, where I found the bag, and then the bag itself.

Next time I'm just going to call and let them come to me. Not that I want there to be a next time, of course. But then, there's always Weeds.
Posted by Melanie K at 9:51 AM No comments: