My divorce is final today. Which, even after so many months, was actually a surprise because, due to a clerical error by his attorney, we had expected that it might get pushed into next year. But she was able to fix it and so here we are. 'Tis done.

Some of my friends have offered their congratulations and asked how, or if, I would be celebrating.

I will not be celebrating.

I don't think that the dissolution of a marriage is anything to celebrate, particularly when there are children involved. The thought of yelling, or even saying, "Hooray!" or popping a champagne cork seems . . . immature. Shortsighted. Pointless. For me, at least.

And we didn't just end the marriage, we also managed to shred the friendship in the process. I hear that's pretty common, but it's definitely not how we set out to handle it. So, although divorcing was absolutely the right thing to do, it still marks a failure that affects not only us, but two very beautiful little girl as well. And I didn't just lose the spouse: I also lost his family, who always felt more like my parents than my own parents did. Again: not much cause for celebration there.

As for the other big question:

No, I will not be moving. As expensive as it is to live here and as much competition as there is for jobs, Thomas needs to be here for his work. Even if we did not share custody, I wouldn't think about moving them away from him. He and I sucked at the whole being married thing, but he's a good dad. So I'll be staying here on the Left Coast. I like it here and so I'll find a way to make it work.
Posted by Melanie K at 2:50 PM 5 comments:

Me: “No. They must fit. I’ve been waiting since July.”

Window Dude #1: “Yeah, seriously. This window just fell out on my head.”

Me: “The HOA had to vote on it. Apparently, they forgot a couple of times and then the application wasn’t on the proper letterhead.”

You are correct sir. Total bullshit. But thank you: I now have new, double-paned windows in three of the five windows in this place, and greatly reduced traffic noise.

Thank you, Home Depot. I won’t stop mocking your company, but I will continue to thank your contractors.

Think you had a bad hair day?

OK, perhaps you did But this is CRAZY hair day. Charlotte and Jack have been looking forward to it for a while now :) 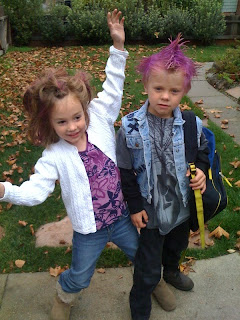 *It's just good luck that they sorta matched.
Posted by Melanie K at 8:13 PM No comments:

Back to the Job Hunt—Flattery, Rejection and All

One of the nice things about looking for a job is that you get to hear things like "You are a really talented writer!" and, "Your resume is impressive!" and "You are clearly very intelligent and highly versatile."

The downside is that these lovely, flattering comments often come just before things like "We have a large pool of candidates, and several of them more closely map what we're looking for." Or the dread, "We'll keep your resume on file and if something comes up that we feel is a better fit, we'll give you a call." No, you won't. It's sweet of you to say so, but no, you won't.

But I am talented and versatile, so . . . onward! In the meantime, I would like to thank the hiring managers who write the nice, if-it's-a-form-letter-it-doesn't-look-like-one and don't bother stringing applicants along with the "We'll keep you in mind." Because they can't possibly, with that many job openings and that many resumes, keep in mind anyone who falls below the level of senior management. It might seem like a nice thing to do, but offering hope where there is none isn't actually kind and some people will actually believe it. After all, I suppose I do fall for the "very talented," "intelligent" and "highly versatile" comments* . . . .


* I know—because I am. I also have an excellent sense of humor ;)
Posted by Melanie K at 9:18 AM No comments: