You may have noticed that I've been a bit spotty about posting lately. It's not laziness or a lack of motivation--I'm constantly composing in my head; it just never makes it to the computer. Charlotte is now in physical therapy, speech therapy and occupational therapy--in addition to her regular class. Then there's the holiday shopping, baking and cleaning to do. To top it off, we've all been sick, off and on, since Halloween. So I've been a wee bit busy. All good reasons, but probably the larger reason is that I'm in week five of a new medication, that, in addition to stabilizing my moods, is also supposed to have a really good anti-depressant effect. Tick tock, still waiting.

You would think that after almost 10 years of being on medication I would be able to accept the fact that they don't work overnight. And this one in particular has to start at a really low dose and then creep up over five to six weeks. Why? Because the one worrisome side-effect is a rash that can be severe, even fatal if left untreated. But it's usually on the face (oh, joy), so it's fairly easy to spot and treat early. So while we search for the proper therapeutic dose, I'm still taking two other medications as well as an occasional anti-anxiety (not good to mix with wine, by the way. Take it a few hours before, not just a few minutes). Our medicine cabinet looks like a little pharmacy and I'm feeling a bit tired and lethargic. So that's my excuse. Such as it is.
Posted by Melanie K at 4:10 PM 3 comments:

At this moment, Hannah is in her room, dancing her own version of ballet to the soundtrack from Les Choristes.

Charlotte is in the living room, dancing to the Red Hot Chili Peppers.
Posted by Melanie K at 9:17 AM 1 comment:

Hannah hamming it up. 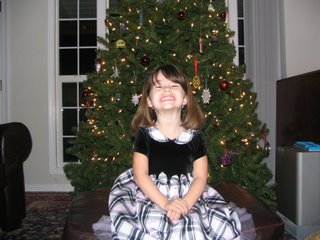 Well I got one of them to look at me! 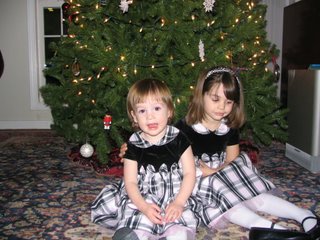 Hannah wondering why Charlotte gets to ride the horse
(because it was the only way to keep her from running away). 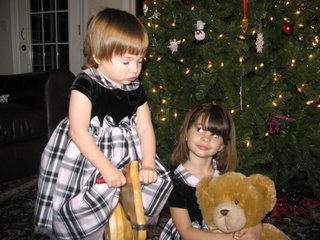 I've been sitting here for the past few days listening to Christmas music--the classical Christmas channel on XM radio and one of the local channels in the car. Hannah insisted and I was happy to oblige. After all, one can only listen to Talk of the Nation so many days in a row before one's kids loses it.

Anyway, back to the music. It reminds me both just how much I dreaded the holidays when I was a kid and how much I look forward to them now. I think I've mentioned before that I came without filters installed: I have a difficult time blocking out noise, other people's emotions, the weave of a particular fabric, and so on. I may have also mentioned that I have five brothers, two sisters--all of whom I love dearly--and, shall we say, emotionally distant parents. None of which make for a calm, relaxing holiday season. Every year, without fail, I ended up with a heavy cold over winter break. Coincidence? I think not.

But now. Now I get to experience the season all over through Hannah and Charlotte. We go decorated-house hunting after school. We've hung a wreath on the front door and another over the fireplace. The tree is up and decorated--except for the lower 1/4 which Charlotte keeps stripping--and Hannah has been revising her list for Santa since her birthday in October. I am resisting the urge to dress the house from top to bottom in pine garlands and white lights. But I am baking batches of gingerbread cookies so the house always smells holiday-ish.

But I never know what to say when people ask "What would you like for Christmas?" There's nothing I really need--except the occasional babysitter and a night out--and the things I might want are entirely impractical. Nice clothes? They don't mix well with paint, playdoh and markers. Books? I adore them, but rarely have time to read anymore. Sticktoitiveness? Sure, but does that come in a bottle yet? And the things I really want can't be gifted: I want Charlotte to lose the stiffness in her body and be able to dance the way she so clearly wants to. I want Hannah to keep being the wonderful little person and big sister that she is. I don't want either of them to grow up too fast. And I want them to always know that I love them more than I ever could have imagined.

So whadda you think, Santa Baby? Can you help me out?
Posted by Melanie K at 10:28 PM No comments:

Courtesy of my friend Jessica:

A Montana cowboy was overseeing his herd in a remote mountainous pasture when suddenly a brand-new BMW advanced out of a dust cloud towards him. The driver, a young man in a Brioni suit, Gucci shoes, Ray Ban sunglasses and YSL tie, leans out the window and asks the cowboy, "If I tell you exactly how many cows and calves you have in your herd, will you give me a calf?"

The cowboy looks at the man, obviously a yuppie, then looks at his peacefully grazing herd and calmly answers,"Sure, Why not?"

The yuppie parks his car, whips out his Dell notebook computer, connects it to his Cingular RAZR V3 cell phone, and surfs to a NASA page on the Internet, where he calls up a GPS satellite navigation system to get an exact fix on his location which he then feeds to another NASA satellite that scans the area in an ultra-high-resolution photo. The young man then opens the digital photo in Adobe Photoshop and exports it to an image processing facility in Hamburg, Germany.

Within seconds, he receives an email on his Palm Pilot that the image has been processed and the data stored. He then accesses a MS-SQL database through an ODBC connected Excel spreadsheet with email on his Blackberry and, after a few minutes, receives a response.

Finally, he prints out a full-color, 150-page report on his hi-tech, miniaturized HP LaserJet printer and finally turns to the cowboy and says, "You have exactly 1,586 cows and calves."

"That's right. Well, I guess you can take one of my calves," says the cowboy.

Then the cowboy says to the young man, "Hey, if I can tell you exactly what your business is, will you give me back my calf?"

The young man thinks about it for a second and then says, "Okay, why not?"

You're a Congressman for the U. S. Government", says the cowboy.

"Wow! That's correct," says the yuppie, "but how did you guess that?"

"No guessing required." answered the cowboy. "You showed up here even though nobody called you; you want to get paid for an answer I already knew, to a question I never asked. You tried to show me how much smarter than me you are; and you don't know a thing about cows...

This is a herd of sheep.

Now give me back my dog."

A Day Without Sun

Some days the sun just seems inappropriate. Loud. Brash. A trying-to-be-cheerful shout in the room of a migraine sufferer. On most days, I love the sun. I crave it. But today I found myself wincing as I thought of Kati Kim and her daughters and how unwelcome the sun must have been. The body of James Kim, their husband and father, was found yesterday, just one mile from where their car was stranded in the mountains of Oregon during a blizzard.

For six days they huddled in the car--mom, dad and two daughters, one four years old, one just seven months. I don't know if I feel such a connection to this story because of our two daughters, or because there were so many times that I've taken a wrong turn, or simply because, put in the same situation, I would hope that I would be strong enough to do what James and Kati Kim did. And they did everything right: They stayed together, Kati nursing both girls to keep them alive; they stayed with the car, using the heater at night until they ran out of gas. During the day, they started fires with magazines, wet wood, and--finally--the car tires, in an attempt to stay warm and to attract attention.

Rescuers found Kati and the girls two days after James left to find help. Then they followed the markers that he dropped along the way: an extra pair of pants, part of a map, a skirt belonging to his daughter. He even had a note with him describing where his family could be found, asking for help. The Oregon police say that James walked a 10 mile loop through the cold and snow, at one point swimming across a stream.

Four days after he left, two days after his family had been rescued, James Kim's body was found. And still the sun dared to shine.
Posted by Melanie K at 4:52 PM No comments: