Left Coast Mom is on Vacation

Lots of travel over the past month and now we're off to Wyoming!

We'll be gone until Monday night, so probably no posts until Tuesday.

Some of those to come:

Recipe for Making It to the Morning Sessions

There seem to be more cocktail parties at BlogHer this year than actual sessions, so this is for this is for any-her in need of a little after-party pick-me-up.

Vampiro
This spicy morning-after cocktail was featured on the last day of the 2009 Tales of the Cocktail conference in New Orleans, at a session called "Paying the Piper: Your Hangover and You."

Fill a highball glass with ice.

Combine the three juices, tequila, honey, onion, pepper slices, Worcestershire sauce and salt to taste in a cocktail shaker. Add ice and shake vigorously, then pour (strained) into the glass.

Recipe Source:
Created by Wayne Curtis of the Atlantic and John Myers of the Grill Room in Portland, Maine;adapted from "Stir Your Soul: Tales of the Cocktail Recipe Book" (Mud Puddle Books, 2009).
Posted by Melanie K at 10:35 AM 3 comments:

Finally Finding Myself, at 40

I've never really liked having my photo taken, even though I was, for a very, very brief period a "model-in-training" if you will, with a couple of shows to my credit.

I've also never thought I was more than run-of-the-mill attractive. Crooked smile. One eyelid a tad lazier than the other. Chin too pointy. Ears too small. These observations aren't all a result of me spending too much time in front of the mirror--though after 40 years, most people have logged a few hours there, whether or not they care to admit it. I've actually heard all of these comments from various people over the years. One charming ex went so far as to preface anything that even approached compliment-hood with "Don't let this go to your head, but . . . "

But why were some photos fabulous and the others, ah, crap?

For instance, my friend Kat always took really good photos of me. In fact, I never looked like the Me that I saw in other photos, but rather, closer to the Me I thought I saw in the mirror. Other people, it didn't (doesn't) really matter how I felt that day, what I was wearing, if I had dropped a couple of pounds or if I had won the lottery (still waiting!), I always manage to look short and squat and very far from the Me I think I know. Well, the Me I'm trying to get to know, anyway.

It recently occurred to me that it wasn't so much how I looked, but that it was the way in which I was relating to the person behind the camera. Kat felt like a sister from the day we met. We told each other everything. There was no hiding anything, and I suppose it never occurred to me to hide from her camera.

Other cameras are held by those for whom I may have conflicting feelings: I may love them, but may also be afraid that I don't measure up. That I'm going to fall short in some area or another. That I'm not smart enough, or ambitious enough or competitive enough. And on and on and on. This is not the fault of those hands in which the camera rests. The fault is mine, because I think those things about myself and project them on to the people I am most afraid of disappointing. And so I curl in to hide, to protect myself from, well, really, from myself.

I've been in and out of therapy for a few years now working on the root cause of this lack of self-esteem, and even when not speaking with a professional, I've made a huge effort to stop the negative thinking and to stop worrying about what other people think of me. I have good days and bad days, same as everyone else. But I think my better days are more frequent, at least in terms of self confidence, and now I have photographic proof. I think.

Last week I updated my profile on facebook with a photo I had taken myself, using the Photo Booth on my Mac. I was bored with the old photo and thought this would be the perfect little project to assist in my efforts at procrastination elsewhere.

Whadda ya know? I was actually looking right at the photographer--who in this case was me. Clear, direct, unafraid, unapologetic. Maybe it seems like a shallow, navel gazing thing, but I see it as evidence that, after all this time, I'm coming to terms with being me. That I was ok with what I was going to see.

There were two other photos--Hannah likes the sepia-toned one best, but I thought I'd post both of them, mostly because the thought of THREE photos of me being out there makes me squirm. I guess I'll have to be ok with that, too. Even if my chin is too pointy and my eye sort of sleepy looking . . . 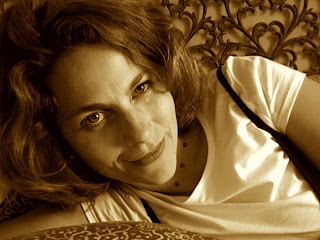 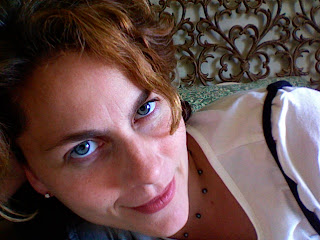 Our babysitter, who just graduated from high school, doesn't know the band Tears for Fears.

She did say that it was great that we still like to go to concerts.

And this after we sat through the concert (which was AWESOME!) thinking we were insufficiently aged.

No, no. Not me. But thank you for immediately thinking that's what I meant! So charming!

It was only this:

I love that public transportation around here doesn't waste time letting you know that a bus is out of service. Which is exactly what the buses in Virginia* always said--that and the route. You'd just have to wait for the entire message to scroll by. But here, you get a short, sweet, one word answer before you can even ask the question: 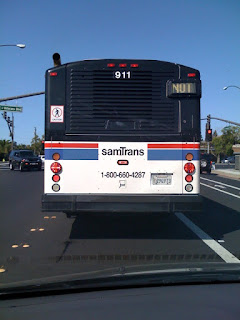 In case you can't see it, the message in the back is "NOT."

Due to budget cuts, they'll be shortening that to "NO."**


UPDATE:
Bah--the front of the buses now offer the very polite "Not In Service."

Can I Get a Mulligan?

I went to the doctor on Friday because I thought I might have bronchitis AGAIN.

Why do they have to weigh you for that??

Most reluctantly, I took off my sweater and shoes and, for good measure, my sun glasses. You know, because they must weigh all of seven ounces.

Surprise! I didn't like the answer the scale gave to the age-old question of "Jeezus Edith! Who switched my jeans for the not-quite-supermodel size?!" Which would be why I wasn't wearing jeans that day, so I shouldn't have been surprised. And this particular nurse won't even hedge a bit and drop it half a pound. She just murmured something about how no one likes the scale, especially if they don't feel good about themselves anyway. Wow! Dr Phil in drag and orthopedic shoes--at my doctor's office!

On Saturday, I started my period and almost immediately lost five pounds. I want a do-over!
Posted by Melanie K at 12:56 PM 2 comments:

I got the first official rejection of my book today.

The very first email in my box.

I knew it was coming--especially after I read over the query letter that went with it. It's amazing how many things you can find that should have been worded differently, or the one little typo that most people wouldn't have noticed, Of course, I did--too late. And I'm guessing the agent did. They have this thing, this odd fascination with words.* Of course, it couldn't have been all the fault of the query; I did send some of the book, too.

And resist the urge to just rewrite the whole manuscript again, first.

Perhaps a glass of wine will loosen things up!
Posted by Melanie K at 7:23 PM 2 comments:

Hannah is the youngest kid in her art class--the others range from 12-16 or so.

This past Tuesday,* they were all talking about Michael Jackson when Judy (the teacher) asked if they wanted to listen to some of his music.

Before Judy could turn on the CD player, a 15-ish year old girl turned to Hannah and said

"Michael Jackson had lots of records. Have you ever heard of those? They had songs on one side and then you had to pick them up and turn them over to hear the rest of the songs! My mom said that records were pretty heavy, too."

This on the heels of an article about the three days it took a 13-year-old, tech-savvy teen to figure out that there were actually two sides to the cassette tape used in the ancient Sony Walkman he was test driving.

It's a lot easier for me to see why kids Hannah's age wouldn't know about the joys of the LP and the jumble-of-tangled-tape agony that was the cassette player. After all, she's only six. But, dammit, a 13-year-old was born in the same century as I. And I'm not yet old enough to refer to the Internet as "that thing you young people use" or as being nothing more than "a series of tubes."

So when the most-sought after gadgets of my middle- and high-school years are spoken of in the tones of awe and wonder usually reserved for the discovery of an ancient civilization, yes. I feel a little old. Not quite hot-tea-and-a-parka-in-July old, but maybe a bit chase-the-snot-nosed-little-bastards-off-the-lawn-with-a-cane old.

* For some reason I haven't been able to sign in to Blogger for a few days. My excuse du jour for the recent dearth of posts.
Posted by Melanie K at 1:12 PM No comments: