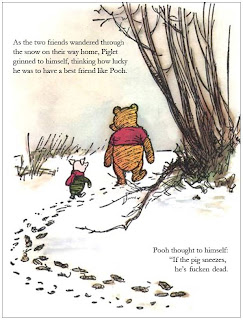 Thanks, Thomas, for the free blog fodder :)

* apologies for the terrible rhyme.
Posted by Melanie K at 11:24 AM No comments:

In Which I Confess My Lack of Qualifications for an Ambassadorship

Diplomacy is not my strong suit.

I try to assess situations fully before reacting. I am (frequently) tactful. I don’t break confidences. I can keep my mouth shut if asked or when absolutely necessary. But if I think someone has been treated unfairly, my instinct is to say so, and not necessarily quietly.

Let's say, for instance, someone loses his job. Layoffs happen, yes. I get that. I’ve been laid off before. But unless the company is going out of business all together, a layoff can be seen as “You didn’t have the skills to make it in the new organization.” Even if the person let go sees it more as an opportunity, a gift, even, there is still an element of “There’s nothing you have to offer that we value enough to keep you here.” (But perhaps, for today at least, I am neither diplomat nor natural optimist.)

Now, when I know this person to be possessed of a keen intellect; a quickness of understanding that makes it as easy for him to absorb new information and spot new connections as it is for him to learn a new language; boundless loyalty; an engaging personality; and unflagging enthusiasm and determination when it comes to improving morale and to promoting the name and reputation of his organization, I think it quite natural that I get a little, what’s the word . . . pissy, when a person of this caliber, my friend, is let go.

But of course, as stunned and irritated as I am, I am compelled to admit that this organization he is exiting is still a remarkable one with an important mission, and I am fully aware that both he and they are better off for the association. I also recognize that he was fairly compensated and that he still has good friends there who are going to miss him, so I’m trying to frame it as less “How could they not recognize what they were losing?” and more “How nice of them to let someone else benefit from his talent and abilities.”

So no ambassadorship for me, but I am trying.
Posted by Melanie K at 9:17 AM No comments:

Time to Do the Laundry! 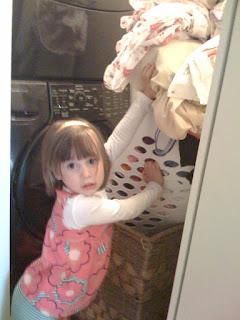 Charlotte turned four in January and still refuses to potty train. We've tried everything:
The pediatrician and I finally decided that it's a control issue. Since she was about 15 months old, Charlotte has been dragged to speech therapy, physical therapy and occupational therapy, as well as to a neurologist, an ophthalmologist, an audiologist, an orthopedist, and to a couple of other "ists" I've forgotten.

No one asked her if she wanted to go to any of these appointments--we just stuck her in the car and went. The potty is the one thing she has been able to control, so it seemed logical that this was the reason for her refusal to do this one thing on our time line. Until today.

After finding out that she has been using the potty at school, I asked her why she refused to do it at home.

So it is a control issue, just not the one I thought.
Posted by Melanie K at 3:14 PM No comments:

Labels: i'm a puppet on her string, kids, life, parenting

Chicken Poop for the Soul

UPDATED: New photo! I was finally able to get Sophia and Zsu Zsu in the same shot.

This morning, the Washington Post provided another reason to love our chickens: apparently, their poop can be converted to energy. Lots of it. And it's actually a triple-threat. According to the article:

"Using a process called pyrolysis, the device super-heats the droppings to transform them into three products: an oil that can be used for heating, a slow-release fertilizer and a gas that the researchers hope will one day be recycled to power the machine."

Chicken poop is already used as fertilizer (and an excellent one, IMHO), but in Virginia, a lot of it makes its way into the Chesapeake Bay. The fish and plants there don't seem to have the same appreciation as the veggies, so converting the excess poop to energy would help reduce contamination of the Bay's waters.

While I don't think that Sophia and Zsu Zsu will be powering our house anytime soon--we'll still be relying on the solar panels for that--it is good to see that our feathered little friends will be adding one more item to the list of gifts they give us. Thanks, Girls! 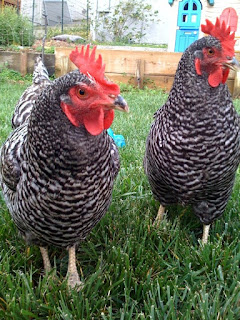 Some random guy just tried to Friend me on Facebook.

In his profile pic, he is standing next to the wreckage of a small airplane that has crashed nose down.

Two of my brothers died when their plane crashed, nose down, at a small airport just outside of Denver, CO.

I am not crying, but I feel curiously . . pale. And shaky. And I keep telling myself that this is nothing more than an odd coincidence that feels like a bad joke.

Due to a DVR malfunction, we missed the first couple of episodes of this season's Survivor and I keep meaning to ask:

How did they manage the color coordination of players? Did wardrobe come in after they split everyone in two groups and say, "Here are the buffs, now you choose something red from this rack and you get something blue from the rack over by the window"?

I'm sure someone finds it aesthetically pleasing but, for some reason, I find it to be almost as annoying as the guy who played the (not really) Dead Grandmother Card, a.k.a: Johnny Fairplay.
Posted by Melanie K at 10:15 PM No comments:

Just got this email from Rick Jacobs of the Courage Campaign--an organization that seeks marriage equality for ALL. Please read it, watch the fear-mongering ad put out by "the National Organization for Marriage" and contribute whatever you can to help counter this ridiculous, narrow-minded bigotry.


This TV Ad Makes Me Sick

On Friday, the Iowa Supreme Court -- by a unanimous ruling -- made marriage equality the law of the land. Then the Vermont legislature overturned their Governor's veto of a marriage equality bill by a two-thirds margin on Tuesday.

And now the religious right is responding with a national TV ad filled with fear about a same-sex marriage "storm" gathering across the country.

This morning, the "National Organization for Marriage" launched a disturbing ad using actors to push lies claiming that marriage equalty threatens personal freedoms. The ad is going up on the airwaves across America -- eight times a day in California -- as NOM seeks to build what they are calling a "rainbow coalition" against equality.

We need your help to fight back right now against this deplorable ad. With many legal experts expecting the California Supreme Court to uphold Prop 8, our only option will be to place an initiative on the ballot to restore marriage equality. To repeal Prop 8, we will need to build a grassroots army for change in every county of California.

In response, the Dolby Family is challenging our community to raise $25,000 as a matching grant to fund Camp Courage trainings for marriage equality activists.

Can you help us respond to these lies and distortions by turning fear into hope? Watch this despicable TV ad now and then contribute to support more Camp Courage trainings by helping us meet this generous $25,000 matching grant from the Dolby Family -- thus doubling their amazing donation:

Modeled on the "Camp Obama" training events that helped propel President Obama into the White House, Camp Courage uses the "Story of Self" to transform personal experiences -- each participant's unique inspiration for supporting marriage equality -- into compelling and authentic narratives that can persuade undecided voters.

"At any time throughout the day I could look around the room and see a smile on someone's face, a tear running down their cheek, and the wheels turning in their head. Every moment, you could look to your left and look to your right and know that you were sitting next to a fellow soldier, someone that will be, or is, in the trenches with you fighting in the name of justice. How powerful is that?"

To build a movement to push back on the right-wing's lies and fear-mongering, we need to train and empower more people like Sara. These transformative trainings have been held in L.A. and Fresno and now San Diego and the Bay Area are next. Meanwhile, we've also mobilized grassroots organizers to launch 23 Equality Teams and 13 canvass events across California, with teams going door-to-door to talk directly to voters.

Please turn fear into hope. Watch this TV ad right now and then do what you can to help us continue to build an army for marriage equality. Your contribution will help us double the Dolby Family's amazing donation and expand Camp Courage into more locations:

We've made history in Iowa and Vermont. Now let's fight the right to make marriage equality a reality again in California.

The Courage Campaign is an online organizing network that empowers more than 700,000 grassroots and netroots supporters to push for progressive change in California.

To power our campaign to repeal Prop 8, please chip in what you can today