There's an App For That

It was a moonless night in late summer and I was stretched out on the path near our campsite, just beyond the canopy of the trees where I had an uninterrupted view of the sky. We were at Tuolumne Meadows, high above the Yosemite Valley floor, a place that, in the daylight, would seem more closely related to the surface of the moon than to the vast forests and meadows and waterfalls that lay sweltering in the valley below.

The closest actual structure (unfortunately the bathroom) was ¼ mile away, so after the campfires started dying away, I could easily imagine that there was no light between me and the stars, and I had never seen so many in a single sky. I kept having the vision of a small girl with a bottle of glitter in one hand and a bottle of sequins in the other, throwing them up against black velvet. In some places they lay so thickly you couldn’t tell one from the other. In others, they were much more spread out, but not a single portion of velvet was left unadorned.

And, although the moon was not up, the stars and planets themselves were bright enough that I had a dim appreciation for what it must have been like in Galileo’s time, when the sky was dark enough that Venus cast a shadow on the earth. As I lay there, I felt no more than a speck in the cosmos, as small and far away from everyone on Earth as those stars were from me, completely alone and yet content.

For the past couple of weeks, Mars has hung like a ruby in the Eastern sky, a more vivid red than I can recall seeing it. Naturally, I had to look it up and, on January 27, Mars was the closest it had been to the Earth in almost two years. I mention this because, when I have to take Kairos out at night, I’m often caught for a moment or 10, mesmerized by the astral display and curious as to whether anyone I know is looking at exactly the same place at just that moment.

I don’t know the names of all of the constellations, just that I can lose myself looking for them and at them. And I like knowing that, right now—this actual moment—Saturn has risen, chasing the moon and Mars, all following my Gemini constellation. And I don’t even have to take the dog out or try to see through the clouds because, guess what? There’s an app for that: Planets 1.6 for the iPhone.
Posted by Melanie K at 11:23 PM No comments:

Also known as, "Oh great, another smartypants in the family."


Charlotte's big pink box of Legos serves two main functions: They're an excellent fine-motor exercise for her, and they keep her amused and engaged for at least an hour--no TV required! This is a huge endorsement, as Charlotte generally lives for two things: Chocolate and television.

After playing quietly for a few minutes, Charlotte asked me to help her take apart two of the bricks.

Me:
Do you know why you can't get them apart?
[[Note: the correct answer was "Because I bite my fingernails down to the quick."]

Charlotte, with an exasperated sigh:
Because it makes me tired.
Posted by Melanie K at 4:36 PM No comments:

Little Kids Should Not Have Seizures. Not.

Charlotte has been on medication to control seizures for more than two years. Before her fifth birthday, she'd had two EEGs and an MRI, both of which have risks--EEG requires sleep deprivation and, for younger kids, the MRI requires anesthesia. I'm not going to equate sleep deprivation with the risks of anesthesia in general, but anyone who has ever seen me sans sleep will understand why there is risk attached. If you haven't had the pleasure, let's just say that that particular irritability trigger is one which Charlotte comes by honestly.

Over the past two years, we've gradually had to increase the medication to adjust for growth spurts. The last time we did this was between Thanksgiving and Christmas. We spent 10 days on the East Coast for winter break, and, not long after we returned, Charlotte had a seizure. And then another. And another.

I should mention that her seizures have always been very small. In fact, for a long time, we didn't know she was having them. But I perfectly remember the first time I saw one. She wasn't yet a year old. She was wearing a navy blue outfit dotted with little white anchors, with a white sailor collar. She was on her stomach on the floor and had just pushed herself up onto her arms when she started shaking. Part of my brain thought, "That looks like a seizure." The rest of my brain rejected that thought outright, insisting instead that it was the exertion of pushing herself up. It wasn't a seizure. No one else saw it. It didn't happen again. The pediatrician thought it was, yes, the exertion of pushing herself up.

Charlotte was born six weeks early and very small--three pounds, 11 ounces. She spent two weeks in the NICU to get her weight up to FOUR POUNDS. They send them home at four pounds. Jeezus, talk about scary. But she never needed any other intervention--no lung, heart, or other issues. Nothing to explain why she wouldn't walk until she was almost two or talk until she was almost three, or why, at five, her fine motor skills would be below average and she'd still be in speech therapy.

In the week after we got home from the East Coast, Charlotte had three or four seizures. We noted it, but decided to take the "watch and see" approach, as she typically has more seizures when she's over-tired. And then the day after her fifth birthday, they started coming, one after the other after the other. Over the course of the morning, she had ten. Ten. She'd never had that many in an entire day. Ever.

A quick, slightly (ha!) panicked call to the neurologist resulted in a new medication that had to be started that very day, plus an urgent request for an MRI through Lucile Packard Childrens Hospital--they are the only place to go if you need to put a kid under for an MRI. We couldn't get in for the MRI until yesterday, almost 10 days after the episode, but they had to bump someone else, so I couldn't really complain about it. Loudly.

The MRI was scheduled for 10:00am, but we had to arrive at 8:30 to complete registration and all of the pre-op stuff--basically to make sure she wasn't sick and to get a current height and weight. Other than me accidentally getting a few deep breaths of the anesthesia (more on that later, perhaps), the whole thing went well. The hardest part of both MRIs was waiting for Charlotte to wake up. She likes her sleep anyway (again, comes by that honestly), and so uses this as an excellent opportunity to get in an extra hour. Both times the nurse had to wake her up after I sat for the hour, watching that tiny body, making sure of the exhale and inhale, happy to see the slight flush of pink that kept her suddenly, amazingly translucent skin from looking too doll-like.

But awake she finally did, and recovered as well as she has from anything before: from the previous MRI, from getting stitches in her head, from various colds, hives, bumps, bruises and scratches--none of which she ever complains about. In other words, she rejected outright Nurse Jenn's instructions that she have nothing but clear liquids and popcicles for a few hours, then maybe yogurt or ice cream before moving on to toast or rice or crackers.

No. Charlotte wanted Goldfish. And chocolate. And pizza. After several minutes of "discussion," we "compromised" on the Goldfish: she got one bowl instead of two. And then we agreed that if she felt as though the milk was going to make her vomit, she knew where the bathroom was. I did get her to stick to toast with butter and honey for dinner but was completely unable to convince her of the potential dangers of running, leaping from the furniture, turning cartwheels and dancing with the dog--all of which were also discouraged by Nurse Jenn. I think Charlotte took Nurse Jenn's lack of specificity as a series of very large loopholes ripe for exploitation.

The neurologist promised to call as soon as she heard anything, and she was true to her word. She called me tonight, at 8:00, because she didn't think I'd want to wait the entire weekend to hear that it was unchanged from the MRI a year ago. She also apologized not being able to give me a better answer to "Why did this happen?". Apparently, "Sometimes it just happens" is all they can give you.

So for now, we're back to "watch and see." I get to go back to trying to suppress the instinct to catch her the minute she begins to fall. And Charlotte gets to keep being Charlotte: Funny, tough, sweet, indomitable. And definitey not ever in the mood to have someone catch her if she falls or even notice that anything happened.
Posted by Melanie K at 9:08 PM 3 comments:

A single misheard word led to a discussion awkward enough to make me glad she was sitting directly behind me. I'm not sure I would have been able to explain why I was cringing and crying with laughter at the same time.

The lyrics in question:

How do I go back to California

How do I leave the green fields here

Warm nights and your sweet magnolia

Me:
It's a tree. It has a beautiful flower.

Hannah:
So when he sings "Warm nights IN your sweet magnolia . . ."

Hannah:
So, how did he do that, exactly? Did he just peel open one of the petals and slide in?

Hannah:
Did he make himself really small to do that? Or was it a really big magnolia?

Hannah:
Did he spend all night there? I wonder what it felt like.

Me:
Hey! It's time for Marketplace! Let's talk about this later! 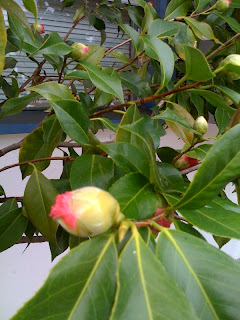 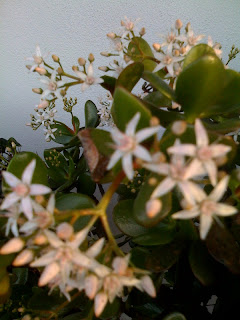 Tough life, eh? The only bad thing is that I'm allergic to god knows what. Hopefully not these. Not ready for that.
Posted by Melanie K at 6:50 PM No comments: