While I am certain that the following is not what our new, and much beloved, President had in mind when he first (or last, even) spoke the words "Yes, we can!" here is a short list of non-political things I learned on Inauguration day:

The serving size for ice cream is listed as ½-cup. Is that calculated using:

Interesting Fact of the Day

Australian researchers found that mixing liquor with diet drinks can intensify the alcoholic effect by 50%.

A Funny Thing Happened on the Way to the Mall

You've seen, on television and in the paper and everywhere online, the crowds that packed the National Mall, waiting for Barack Obama to be sworn in as the 44nd President. None of those people drove to the Mall. A few were dropped off by limo or taxi. Many of them walked. But many more arrived by Metro, Washington D.C.'s subway system.

My friend Sharon and I took the Metro in from her home in Bethesda, MD. Because her stop is almost at the end of the line, the cars were relatively empty when we boarded. But by the time we transferred to the correct line, the trains were full, and when we finally reached our station, the cars were packed so tightly that you didn't actually need to put your feet on the ground.

It took us 40 minutes to get from Bethesda to the L'Enfant station. It took another hour to get from the train door to the street: 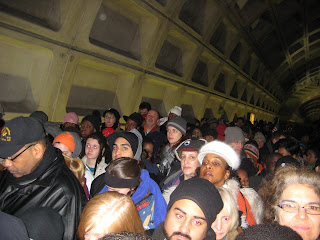 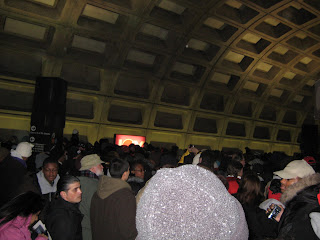 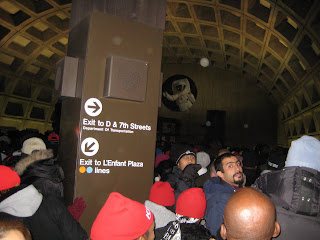 The funny part? No one was angry. Some were afraid that they might miss everything. Some were pushing, but only because they were being pushed and had no choice. But everyone apologized for pushing and made sure no one pushed or knocked over the little kids. But no one was angry about being stuck underground for so long with no idea when we were going to be set free. We just laughed and chanted "Let my people go" and "Yes We Did" when we finally moved toward the gates.

Of course there were a few other, less polite, chants:

Inauguration 2009--The View From The Mall, Part I

I wanted to capture a little of what it sounded like to those of us on the Mall. The echo was at first annoying but came to feel appropriate, as a voice ringing down the halls of history ought to sound and feel.

A Note About the Inauguration

This was the happiest crowd of people I have ever seen. Patient. Joyous. Singing. Chanting. Laughing.

Two million people and not a single Inauguration-related arrest.

Two million people and not a frown in sight.

I've loved being here and I love this day!
Posted by Melanie K at 6:28 PM No comments: 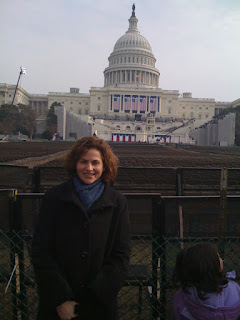 Hannah is a Brilliant Artist--and Only Six 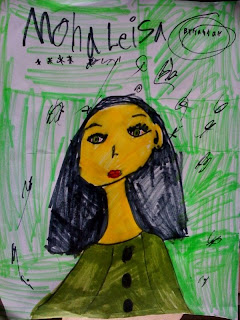 The Convergance of Life, Politics and Family

I am going to Barack Obama's Inauguration

I'll probably have to walk two miles to get there.

I have no ticket to the swearing in.

I have no guarantee of a spot on the parade route.

I don't have an invite to a ball, or a party of any type.

I'm not sure I even have a coat warm enough for the East coast weather.

But when I allow myself to believe it, I am, for the first time in a very long time, gloriously and incandescently happy.

Because I am going to Obama's Inauguration.

As an added bonus, I am going to DC alone, which means six hours on a plane by myself. And six more on the way back. Very happy indeed.
Posted by Melanie K at 1:43 PM 2 comments:

WASHINGTON—A team of nine specially trained handlers have successfully lured outgoing vice president Dick Cheney into a reinforced steel traveling crate in order to transport him back to his permanent enclosure in Casper, WY, official sources reported Monday. "He's a smart one. Once he sees the crate, he gets pretty nippy, but we've learned a few tricks over the years," chief VP wrangler Ted Irving breathlessly said while applying pressure to a deep gash on his forearm. "If we break a rabbit's legs and throw it in there, he will eventually go in to finish it off. Doesn't work with dead rabbits, though. Cheney only eats what he kills." Irving said that the latest vice presidential relocation went much more smoothly than September's diplomatic trip to Georgia, which was delayed for several hours after Cheney mauled three secret service agents and escaped inside the White House walls.

Until I'm feeling more like myself, I thought I'd share a few of the photos from our road trip last summer.

Thomas and the girls walking up the glacier at Logan Pass: 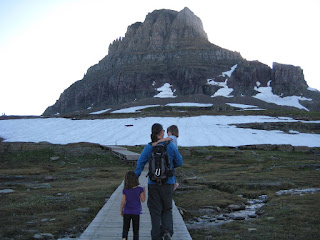 Wildlife in the parking lot: 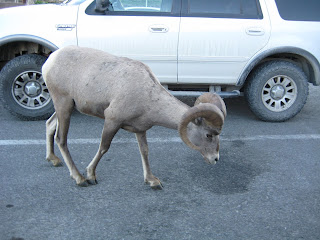 The reason it looks so close isn't because the zoom on my camera is working better, but because I took the photo from the door of the minivan. Into which I leapt to avoid the horns.
Posted by Melanie K at 11:01 AM No comments: